We Want the Airwaves

Three first time TV makers risk everything to get their groundbreaking show on the air. 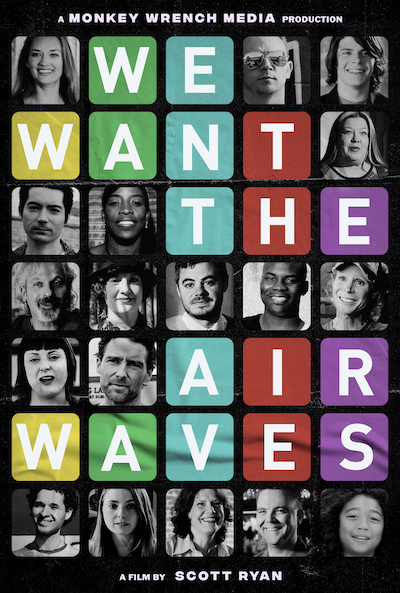 A feature length documentary chronicling the making of the groundbreaking docuseries Manifesto!

About We Want the Airwaves

Filmed over the course of 10 years, We Want the Airwaves chronicles the journey of a trio of first time TV makers as they set forth on a daring adventure. The group creates, bootstraps, and films an activist focused docuseries (Manifesto!) in the year 2005, with the ultimate goal of launching the first citizen’s platform on network television.

Cut from countless hours of behind the scenes footage and interviews with TV & Cultural insiders and outsiders, We Want the Airwaves follows the turbulent making of Manifesto! all while exposing the harsh realities of the ethically challenged unscripted television world.

The roadblocks for the trio quickly become monolithic. Besides the inevitable interpersonal conflicts that develop, how do you sell a TV series which challenges the status quo? The kind of series that advocates for viewers to get off the couch and get active in their communities? A show that requires bold, visionary executives to carry it over the Mount Kilimanjaro of network personalities?

As the filmmakers boldly navigate Hollywood, with a nearly blind commitment to their plan, they raise just enough funding to shoot a pilot. As they begin to pitch their series, they are fueled by consistent adulation from their peers & TV executives alike. These accolades bolster their belief that they will change television as they know it and give a broadcast voice to a generation.

Messages of hope – Why we made “We Want the Airwaves”

In the year 2005,  television was a platform largely devoid of hope. It lacked the kinds of real stories that inspire people – to do better, to rally their communities, to lend a hand to a stranger, to protect the defenseless, and to pay it forward.

Manifesto! was a source of hope — the anthemic, televised answer to this problem.

As we made We Want the Airwaves it became clear that the issues addressed in Manifesto! were comprehensive – the show tackled women’s rights, climate change, sex worker rights, animal rights, civil rights, etc. In doing so, it illustrated a societal problem – these stories were not being documented on television.

The very creation of Manifesto! brought these issues to the forefront regarding televised/streamed media:

Representation: Are diverse community stories being told? Who is telling those stories? Are the represented allowed a role in telling their stories?
Audience & Platform: Does a citizen’s platform exist? Does the audience have access to stories about their fellow citizens? The kinds of stories that break through biases and provide solutions?

Today, we have these voices online and increasingly in the news/on news channels, but the lack of urgency and functional calls to action are a very real problem.

“Yes, we absolutely need to know all the doom and gloom because we are approaching a crossroads, and if we don’t take action it could be too late. But traveling the world I’d see so many projects of restoration, animal and plant species being rescued from the brink of extinction, people tackling what seemed impossible and not giving up.

Those are the stories that should have equal time, because they’re what gives people hope.  If you don’t have hope, why bother? Why should I bother to think about my ecological footprint if I don’t think that what I do is going to make a difference?” – Jane Goodall Still has Hope for Us Humans, New York Times

A Generation X story to it’s core, We Want the Airwaves documents and addresses this problem while also capturing a rare moment in Hollywood: where the digital divide between standard definition and high definition and between broadcast and streaming all began.